GREAT Pill Edit by the amazing Guy Wright (who proves he isn’t just amazing at yo-yoing – but becoming equally as amazing at Kendama and Pill!) Love it! Pills sold out but working on

Keep up with @365YoYoTricks on YoYoExpert!

Have you been keeping up with 365yoyotricks.com? They post a NEW trick EVERY DAY! YoYoExpert has been proud to be an official sponsor of this amazing project all year! Be sure to check out

Guy Wright and Nathan Sutter have put the gloves on to duke it out in a battle of all battles! Watch, enjoy, then vote for your favorite video on SPYY’s Website: Vote for who 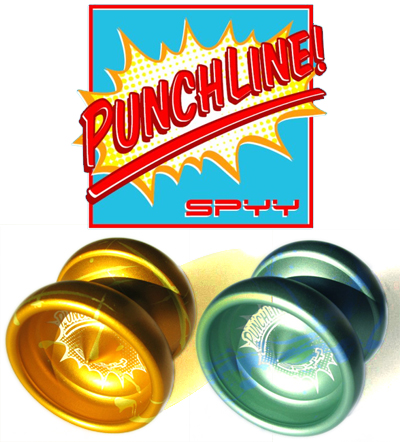 Guy Wrights very popular “Punchline!” yo-yo will be restocking here at YoYoExpert in the very near future!  Two great colors will be available: Orange with Yellow SPLASHGreen with Blue

Brought to you by Sector Y: Superhero Guy Wright returns for his final chapter. With his trusty sidekick, the Punch Line, Guy Wright deals his enemies a few one-two grind/stall and repeater punches, as

YoYoExpert September 5, 2009 Comments Off on YYJ Atmosphere and SPYY Skyy Chaser are here!

YOYOJAM RELEASES THE ATMOSPHERE Makoto Numagami Signature Series The future of yo-yoing is now. Advanced players require a completely unresponsive yo-yo that will give long spin times and tight binds. With these ideals in