One Drop News – from their forum.

Please welcome Ryosuke to the team. We are so happy to have player representation in Japan and we couldn’t have chosen better. 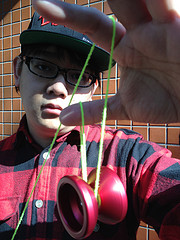 In his own words:

“I started playing with yoyo when I saw in elementary school and saw on TV that surfers were playing with yoyo while they were waiting for the right wave to surf. As soon as I saw that I wanted play with yoyo, so I went to the toy store and bought one and I was into it. A year after that, Bandai started promoting Hyper yoyo and hyper yoyo boom began in Japan.

I started to play with hyper yoyo and number of kids playing with yoyo increased in my town, made a lot of friends and I used to love to play with yoyo all day as soon as I got home from school. I practiced everyday and got tested with tricks as soon as I learned some new tricks and competed against my friends.

Around 2000 the yoyo boom was over and a number of stores who carried yoyos and strings decreased so I wasn’t able to play with yoyo very much. Couple years later I got in high school and I saw a boy playing with yoyo on TV,felt nostalgic and shocked. He was doing a lot of tricks that I’ve never seen before and made me notice that there were so many things you can still do and I got into yoyo again.

The boy I saw on TV was a 2A player who is known around the world, Koji Yokoyama. I started practicing 2A with the yoyos that I used to play with. After while, I found out through internet that there were 5 divisions in contest, and I got interested in 1A. As I saw more videos online, I found a player who did the style that I liked. His name was Mark Montgomery, who I still look up to. I like his unique playstyle, and his aura as an player. I started to do 1A, and I started to go to yoyo meets, and I started to run Hachiouji yoyo meet in Tokyo. As we had more meets, I started to make more friends and I started making it into finals at contest from practicing with friends and competing against each other.
As yoyo companies started to make yoyos out of metal, I met the Project by One Drop. One Drop’s yoyo played great and it matched my playstyle, and I became fan of One drop immediately. Eventually, I had a dream of becoming a team member of One Drop.

As the technology of yoyo evolved, I met a person who changed my yoyo life. That person was Masanobu Iwata. He asked me to become a head judge for 44CLASH because I ran the yoyo meet and I knew how to judge.
Masanobu, Dee and I ran the 44CLASH together, and it became one of the most recognized yoyo contest.

Finally in 2012, another big change in my yoyo life happened. I finally got accepted to join One Drop team. I am so happy that I never gave up.
I would like to thank Shawn, David, One Drop team member, and my friends who have supported me.