In 2010 YoYoExpert joined forces with YoYoFactory to bring the first ever YoYoFactory Mystery Box! Year after year this has been one of the most exciting and sought after releases on our site!

We are confident that this FIFTH ANNUAL MYSTERY BOX RELEASE is going to be the best one yet! Plus a chance to win a GRAND PRIZE when you buy the standard Mystery Box! 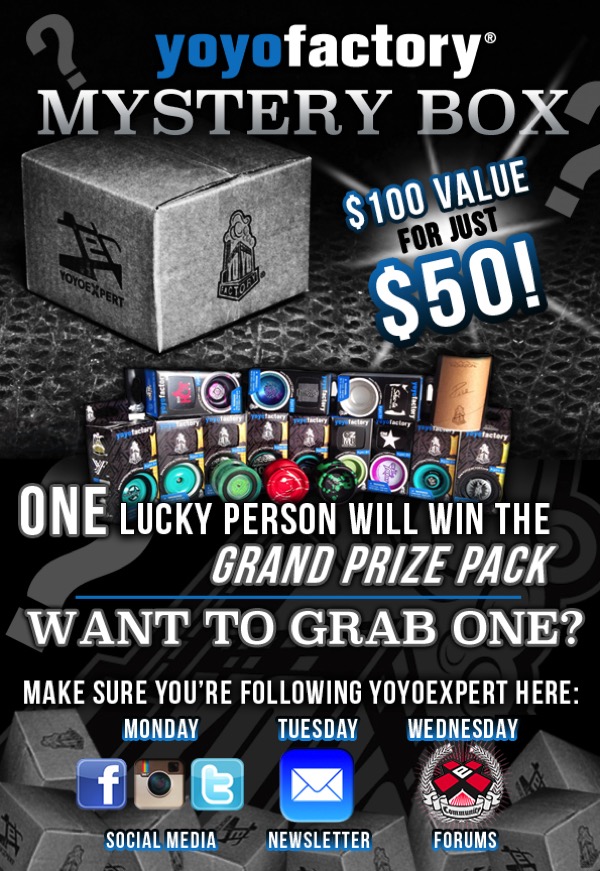 Special for this year we have TWO more ‘limited’ options (in addition to the standard Mystery Box)!
The Premium & Collector’s Edition feature some really neat stuff – but will be HARD to get – there are not many to go around! 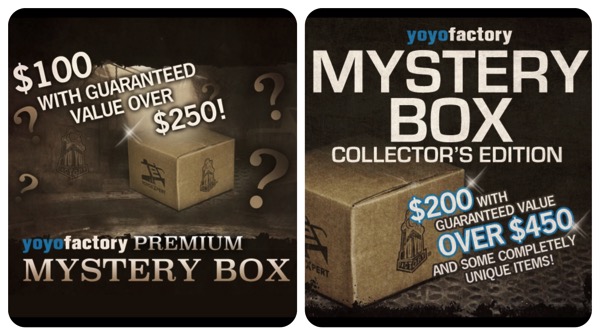 How do you score one?!

Starting Monday November 24th (Thanksgiving Week) YoYoExpert will make one announcements each day Monday through Wednesday. (Three Releases in Total!)
Once the announcement is made – a countdown begins to release!
When the countdown ends this will be your chance to grab a Mystery Box!

Make sure you are ahead of the game by following or subscribing to us in advance as announcements will be made in the following order!

Each morning we will announce the 2-3 hour “Time Window” for that day.  Any time during this “Time Window” we will make an announcement via that days platform and the short countdown will start.  Once that count down ends the Mystery Box will be available. Good Luck!

ALL Mystery Box ship FRIDAY NOVEMBER 28TH regardless of purchase date. Maximum of Two Per Person!